An International Peace Conference was held from 26 to 28 September 2017 at UNESCO Headquarters in Paris. It was organized by the World Fellowship of Buddhists and the Permanent Delegation of the Kingdom of Thailand to UNESCO, under the aegis of Venerable Master Chin Kung, President of Pure Land Learning College Association and Friends Master Chin Kung at UNESCO. Its theme was "Creating a sustainable society of peace: a legacy of King Bhumibol Adulyadej".

The World Buddhist Organization has, among other objectives, to "work for happiness, harmony and peace on Earth, and to collaborate with other organizations working for the same purpose". 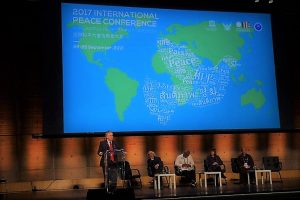 Invited to this conference, the Félix Houphouët-Boigny Foundation for Peace Research was represented by its Secretary General, Professor Jean-Noël Loucou.

For three days, participants from five continents debated ways and means to create a sustainable peace society. Papers, panels, exchange of experiences have focused on inter-religious education, inter-religion and conflict resolution, nature, being and faith, the contribution of traditional culture to To be human.

The afternoon was devoted to the debate on the legacy of King Bhumibol Adulyadej, with contributions by Professors Steve Young of Harvard University, Titus Lebert of the University of Vienna and Venerable Phra Anil Sakya.

The second day was a lecture by Professor Yuli Liu on "the guiding principles of ancient China". Then followed a round table with the UNESCO ambassadors on inter-religious education. The Secretary General of the Félix Houphouët-Boigny Foundation for Research made a presentation on the "Panafrican School of Peace project and inter-religious dialogue in the process of national reconciliation in Côte d'Ivoire". The afternoon's debates focused on inter-religion and conflict resolution, religions (Christianity, Buddhism, Islam) and the environment.

The third and final day of the conference began with an international ceremony of ancestral remembrance. Then was the experience of the World Buddhist Organization, with case studies, including the Pure Land College of Toowoomba in Australia. In the afternoon, a discussion focused on strengthening religious education and social harmony towards better understanding and acceptance.

A presentation, with a projection of a documentary, allowed a presentation of the experiment on the crystallization of water which shows how the thought acts on the environment. The closing ceremony of the conference was marked by speeches by the UNESCO representative, the President of the World Buddhist Organization and the Venerable Master Chin Kung.

On the sidelines of the conference, the Secretary General of the Foundation had an interview with the Venerable Master Chin Kung, and working sessions with the Permanent Delegate of Côte d'Ivoire to UNESCO, Ambassador Denise Houphouët -Boigny, Director of the Africa Department of UNESCO, Mr. Firmin Matoko, with the Head of the Media Development and Society Section, Ms. Mirta Lourenço and the Austrian Professor Titus Lebert.

UNESCO reiterated its support for the Panafrican School of Peace project, and for the organization of World Radio Day 2018 at the headquarters of the Félix Houphouët-Boigny Foundation in Yamoussoukro.