Report on the Suppression of Forced Labor, March 30, 1946

At the French National Constituent Assembly

"Forced labor, with its sad train of low wages, maltreatment, paucinatality, exodus to cities where, worse, foreign colonies create between what is commonly called colonized and Colonizers a growing gap, which we all have a duty to fill if we want the French Union to be a living reality."

Tribute to his native village, Yamoussoukro, May 3, 1956 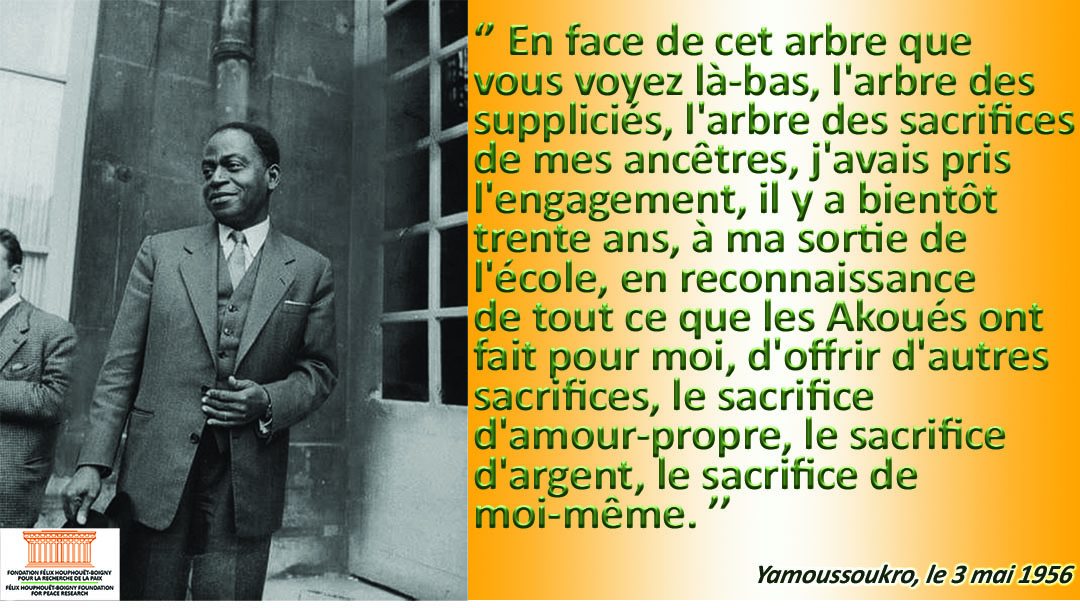 "At my birth, it was even thought that my way would be preaching as a fetishist, I have not escaped my destiny since I still preach. And despite this fetishist origin, I want to tell you, to justify some of my actions Which sometimes confuse the mass that trusts me when I speak to him of politics of outstretched hand, of non-violence, of forgetting the past: I became a believer, not a simple believer who is content in the morning and evening to go I am a little believer, I feel so small, and God knows how small I am. "" I am small, and my responsibilities, which stem from Your confidence in your responsibilities to Africa, to France, to Europe, and perhaps tomorrow to the world, Weigh heavily on my weak shoulders."

"Every day, in times of meditation, I try to ask God to help me, and I say to him:" If the trust of men imposes upon me such responsibilities, at the level of which I must act, In the accomplishment of my heavy task, you think that the strength and influence that flow from the confidence of my brothers will cause me to commit injustice, to trample the right of the weak, so, God, This trust disappears, my responsibilities disappear and I return to Yamoussoukro, my little village, to my little hut."

"Yesterday they said: I would prefer to be the first in my village rather than the second in Rome. Today, I tell you: it is better to be the millionth of a solid, powerful, rich ensemble, listened to in the World, respected in the world, alone capable of assuring by its powerful means the harmonious development of man, the only one capable of elevating the human condition, than to be the first in a miserable state."

"It is not the framework of independence that matters, but the content: economic content, social content, human content. If we could, from our resources alone, by our To the African man the happiness we wish him, we would have chosen nominal independence in spite of everything that tied us to France, but because we are convinced that we can not ensure the real progress of Africa We have preferred, in view of the law of the century, the interdependence of peoples, we preferred to integrate ourselves into a large economic and political group, which is the Franco-African Community."

"It is the man who honors the title and not the title that honors man."

"Young people, then be impatient, but be it reasoned."

"I hate hatred and I disapprove of all violence in the relationships between men."

To the Ivorian National Assembly, January 15, 1962

"In Côte d'Ivoire, where the consciousness of responsibility from generation to generation is so vivid, pride means that each one of us leaves more to the future generation than he has received."

"Sterile condemnations, even repeated to satiety, only meet indifference among those who have the madness to dominate the world." 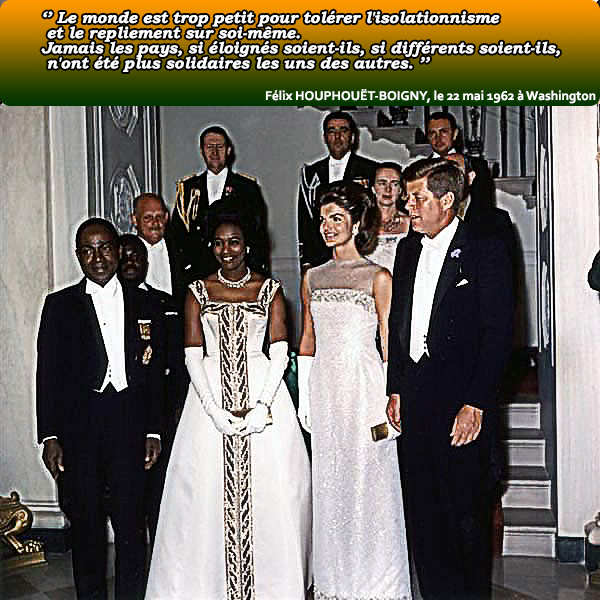 "The world is too small to tolerate isolationism and withdrawal. Never have countries, however far apart, however different, been more supportive of each other."

"One can be mistaken, it is human, but one must be careful not to deceive others."

"Of course, we are not a socialist country, but our ambition is to realize through work, in the discipline freely consented to, in the close union of the heart and the spirits, a social bold."

"The war has never resolved completely, and today it loses it, can hope to win it one day."

"Since economics can not be the only measure of mankind, let us be able to integrate culture in the dynamics of development, far more fully. A culture which itself is dialogue and which goes beyond the classical forms of expression Artistic activity to which certain elites limit it, knows how to be, at all levels and in all circles, the occasion for a collective impulse and profit as well as a "soul supplement" for our growth."

"Côte d'Ivoire can not remain an oasis of peace, stability, prosperity in the midst of a desert of instability, poverty and misery. It is not the Ivorian oasis that will approach the desert, We want to help the realization of many oases of greenery and the key to our action is understanding and tolerance: to hear one another before loving one another and to know one another Respect, respect for the sovereignty of others. We ask others to do so."

"We want to move forward, certainly, but without denying our past, without turning our backs on those of our forms of civilization that are our originality and which the world needs, we know."

"Nowadays, no doubt more than in the successive epochs that humanity has traversed, world peace is indivisible."

Installation of the First Stone of the City "Riviéra", September 7, 1970

In Abidjan in the Commune of Cocody

"A miracle, like a bet, is prepared, it is conditioned, it is measured, it is decided and it is realized by force of will and perseverance."

"What the Ivorian wants is the sharing of wealth and not misery, and to do so, he must, above all, contribute to creating these riches."

"What we want is to make a bold social. We are on the right track."

"In the quest for peace, true peace, just and lasting peace, we must not hesitate for a moment to resort to obstinacy in dialogue."

"Côte d'lvoire is too harmonious and serine, so that responsibility is taken to blindly destroy its natural beauties and its most authentic riches. The man has gone to the moon, but he does not know how to make a flamboyant or Let us keep our dear country from irreparable errors which might in the future cause it to regret its birds and its trees."

"On the day when those who provoke wars must be in the front line, at the head of the men they engage in the turmoil, we will certainly see fewer wars on our planet. Personally, assured to be safe in concrete shelters or far from the line of fire, while their peoples, torn from their peaceful occupations, will be forced to kill each other."

"It is a mistake to believe that there is no alternative but war to eliminate apartheid, when one can and must, from a perspective of peace in Africa In any case, dialogue will prevail one day, before or after the war, and it is infinitely preferable to resort to it as soon as possible in order to avoid war, which I will never repeat enough Nowadays."

Press Conference on the Dialogue in Abidjan, April 28, 1971

"We must not also have our Third World and our rich people in Côte d'Ivoire because the injustice and selfishness of others will not erase and justify our own injustices and selfishness."

Seminar of the PDCI-RDA Political Bureau in Yamoussoukro, June 12, 1973

"Rural exoduses are not to be avoided by prohibiting access to cities, but by helping young people and adults to have equal access to dignity, well-being, decent housing, education , Culture, health, and also the joy of living."

"If prosperity does not always produce concord, the denouement is rarely synonymous with tranquility."

"The sanctity of work ennobles both those who carry burdens or carry heavy machines like those who, in the silence of laboratories or offices, give their task the best of their thoughts and their care."

At the Economic and Social Council in Abidjan, June 30, 1976

"The goal of development is not a "homo economicus", but man, in the street, in the fields, in the factories, in the offices, the man in his family."

"Peace is not a word, it is behavior."

"The hungry man is not a free man."

Solemn opening in Côte d'Ivoire of the International Year of the Child in Abidjan, January 27, 1979

"My God, where are the non-aligned who accept the weapons of the countries on which they do not want to be aligned ?"

"Borders are scars of history, even the best beauticians will not be able to erase them so easily."

"As a gift from heaven, and at the same time a burden imposed on us by our condition as men, the child represents our most precious capital, and society must protect it from the dangers and the vagaries of life. Today's child is the father or mother of tomorrow, the future leader of our city. It is important, by surrounding it with love and understanding, to train his intelligence and personality to fulfill his obligations and to The future of our society is at that price, and its major concerns remain one of the very foundations of our policy."

"True happiness is appreciated only when lost."

"There will be no peace as long as force appears the only possible remedy to resolve intolerable situations."

"Suffer that the believer that I am believes that all those who believe in one God must respect the various paths they take in order to reach the one Creator."

"It is easier to make war than to make peace."

Excerpt from the Speech delivered at the Opening of the 9th Congress of the PDCI-RDA, October 1, 1990

"The Houphouët-Boigny Foundation for the Search for Peace and the Basilica of Our Lady of Peace are both permanent messages for Ivorians, all Ivorians of origin or adoption, all the friends of Côte d'Ivoire. A permanent message of peace, peace in hearts and minds, peace in everyday human relations, peace to fortify the climate of peace that has allowed us in thirty years despite all the difficulties, despite the mistakes, it is human, to realize in all the fields of sensible progress of which we are right, whatever one may say, to be legitimately proud."