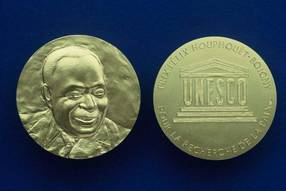 To pay tribute to President Félix Houphouët-Boigny's work for peace, in the world, one hundred and twenty (120) countries in 1989 sponsored a resolution adopted unanimously by the Member States of UNESCO in To establish an International Prize for the Search for Peace bearing the name of the Sage of Africa.

The Félix Houphouët-Boigny Peace Prize, which is today the most important distinction awarded by a United Nations Organization in the field of peace, is intended to honor individuals, organizations or institutions Having made a significant contribution to the promotion, research, preservation or maintenance of peace, in the spirit of the Constitution of UNESCO and the Charter of the United Nations.

The General Conference of UNESCO underlined the exemplary nature of the struggle of a man who had devoted his whole life to the defense of peace. She insisted on the highly symbolic character of her personality, which for more than fifty years has been a bridge of friendship and fraternity between Africa, Europe and the world.

When he disappeared on December 7, 1993, all the great men of the world paid tribute to his action in favor of peace. Referring to the memory of the illustrious disappeared, HE Jacques Chirac, President of the French Republic, declared: "... Félix Houphouët-Boigny is one of those exceptional men whom Providence has instilled with parsimony over the centuries. For the new generations and those who will follow them, there will remain an example of patriotism, clairvoyance, constancy and generosity ...".

HE Abdou Diouf, President of the Republic of Senegal, sponsor of the Prize nominated by President Félix Houphouët-Boigny himself, declared: "... Many social and political crises in West Africa have been resolved thanks to its discreet intervention , As a wise man, and to such a man, one can say without flattery: you have deserved from Africa, so many positive acts will undoubtedly earn you our eternal gratitude and respect."

Since its inception, the Prize has been awarded to personalities or institutions to support their efforts for peace, dialogue and human brotherhood.

In a resolution sponsored by seventy-two countries and adopted by the United Nations General Assembly at its 51st session in November 1996, the international community welcomes the creation of the Félix Houphouët-Boigny Peace Prize. Pledged its full support.

The jury for the Félix Houphouët-Boigny Peace Prize, wich is supported by many countries on the five continents, spares no effort to insure the international recognition to the Prize, in accordance with President Félix Houphouët-Boigny's wishes, whose philosophy and example will continue in President Henri Konan Bédié's words, to inspire the defenders of the Peace in the World.

Given the international community's acceptance of this high distinction, UNESCO appeals to all African states and friends of the Sage of Africa to ensure that, in keeping with its memory, To support the Félix Houphouët-Boigny Peace Prize.

The prize, which includes a check for € 122,000, a gold medal and a diploma signed by the Director-General of UNESCO, is awarded each year by an international jury composed of eleven prestigious personalities from five continents and chaired by Mr. Henry A. Kissinger, former US Secretary of State, Nobel Peace Prize laureate.

The Director-General of UNESCO invites annually by circular letter all Member States and non-governmental organizations in consultative status with the Organization to submit nominations.

In addition to Member States and non-governmental organizations, the following persons and institutions may nominate candidates:

List of winners of the Félix Houphouët-Boigny Peace Prize